The Tabby Point story started very early in the 20th Century, with the first mention of them in 1902 in "The Book of the Cat" by Frances Simpson. Mrs Hood was breeding them in Scotland in the 1940's, and there are photographs in existence dated 1944/49, but they did not become widely known or popular.

The first serious breeding started in 1960, by two different breeders unbeknown to each other. Miss E Alexander's Seal Point Queen Lady Me, produced a Tabby Point female called Patti, Lady Me actually got out prior to going to Mrs Buttery's stud Druid, so it was probably a dual mating, firstly to an unknown cat, then to Druid, so Patti's father could have been either of the cats. Mrs M A Bennett had a Tabby Point female called Misty, from a half Siamese called Tiggi. Patti was later mated to Mrs Buttery's stud Samsara Saracen, and produced six kittens, two Seal points and four Tabby Points, the tabbies were shown at the Croydon Cat Club show in 1961, in the Any Other Variety, and were the subject of much interest, all being sold very quickly. Misty went to a Mr R A Pears, and was renamed Miss Tee Cat, she was later mated to Mr & Mrs Warner's Spotlight Troubador, and the Warner's fell in love with the Tabby Points, and had one of the litter, a kitten called Praline. The early generations were known as Shadow or Lynx Points, and registered as Breed 26, AOV. From their first showing the cats created a sensation, their type was superb, and it was a long fight to get them recognised as Siamese, and it was requested that a breed number, and championship status be granted for them. The GCCF eventually granted this in 1966, and gave them the breed number 32, to show them as a separate breed from the 24 series.

In 1966, the first cat to gain the title of Champion was Spotlight Penny Lynx, who was from a mating of Whiteoaks Malahide and Praline. Soon other cats made the grade, amongst them Mrs D Yorke's Ch Reoky Cheetah. In 1971 the GCCF created the new award of Grand Champion, and the first to win the new title was a Tabby Point, Mrs A Aslin's Gr.Ch. Seremban Liger, who later became the stud cat of Mrs J Brain. 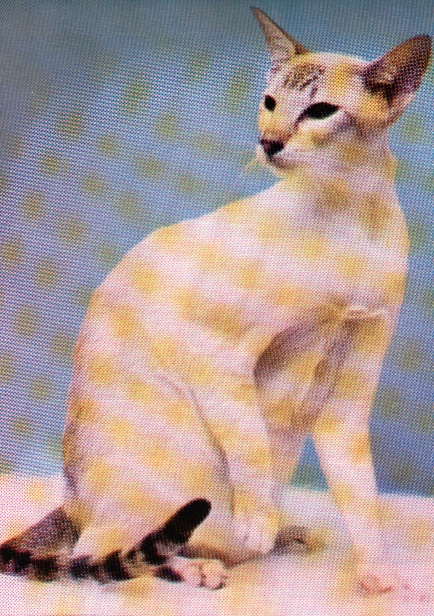 In 1975 the GCCF created its own show, "The Supreme". After the first two shows, the GCCF created the new title of Supreme Grand Champion. Mrs J Brain's own bred Chocolate Tabby Point female Sup.Gr.Ch. Moondance Jocasta, a daughter of Gr.Ch. Seremban Liger had been at the first Supreme Show, and attained Best in Show Adult, she was granted the title of Supreme Grand Champion in retrospect, therefore becoming the first to achieve this honour. In sixteen years the Tabby Points had gone from an unrecognised breed, to the pinnacle of the cat fancy. The next Siamese Supreme Champion came in 1982, and yet again it was a Tabby Point, Sup.Gr.Ch. Zachary Apollo, a Chocolate Tabby Point male, bred by Mrs J Lynn, and owned by Mrs D Sillis. In 1984 Mrs M Hunts Red Tabby Point Male, Sup.Gr.Ch. Soria Sanjo Panza, a son of Sup.Gr.Ch. Zachary Apollo, won the title. The Tabby Points then had to wait for a further 11 years, until 1995, for their next Supreme title winner, this time it was Mrs S Brooks Seal Tabby Point Sup.UK.Gr.Ch. Brookwell April Rose. Then in 1997, the Tabbies triumphed again, this time in the form of a Chocolate Tabby Point, Sup.UK.Gr.Ch. Tabbra Bon Chance, owned and bred by Mrs E Myles. Tabby Point breeding is continuing to set the pace in the Siamese World. Tabby Point Open classes are regularly well entered, and their numbers often exceed those of the breed 24's. They are now being actively bred in all the new colours.